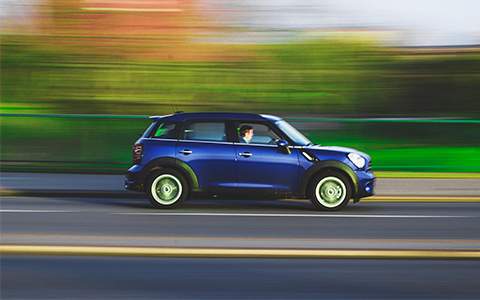 The simple truth about speeding is: the faster you go, the longer it takes to stop and, if you crash, the harder the impact. Even small increases in speed could have severe consequences. If a pedestrian steps out into the path of an oncoming vehicle which is speeding the difference could be a matter of life or death.  In an emergency, the average driver takes about 1.5 seconds to react. Stopping distances increase exponentially the faster you go.

This is not suggesting that you drive 5km below the speed but rather not to drive 5km over the speed limit. In Canada the speed limits take into account the response time and the distance to stop that is needed in the event of sudden braking.

Lets say there are two cars travelling one going 60 and the other 65, suddenly a car pulls out of its driveway or a child runs into the street. If both cars are traveling side by side and they brake at exactly the same time where the car that is driving 60km would manage to get the speed down to about 5km when it hits the pedestrian or car, the other car driving at 65km would impact at about 30km – a speed fast enough to be fatal.  Take a look at this chart on stopping distances.

The stopping distances on the infograph are calculated based on the following assumptions:

The stopping distances in the graph are generic and may be influenced by a number of driver, vehicle and environmental factors:

With all this information we can now say that driving slower saves lives.

AMC Insurance is your one stop for all your insurance needs. To find out more, visit us on facebook or our website or call us today.